The Artwork
By Sinthia Cousineau

This section will focus on the third workshop that occurred  on Wednesday October 15th, 2014. For the activity the classroom was arranged so that all tables were near each other forming one large table. During the workshop the class was presented with a table covered in a lovely purple cloth, which was entirely covered with a variety of different keys of all shapes and sizes. Each student was then asked to select a key of their choice. With this key they were then asked to design an artwork inspired by the key. The key was intended to symbolize how objects could be used in art activities to inspire an idea. The key is a symbol, for instance it could symbolize the key to success or the key to one’s heart.
This activity was meant to explore how one object could have a variety of different messages, universal responses and personal connections.  Art can greatly enhance the analytic experiences of insight (“seeing in”). This is probably because art is concrete and visual, in addition to its value in uncovering unconscious imagery and discovering unconscious fantasies and impulses (Rubin, 2001).When trying to understand a person it is useful to examine their artworks and analyse the emotions and meanings in contains. For example, a simple object like a key could have multiple meanings that can express emotions or a deeper personal issue. 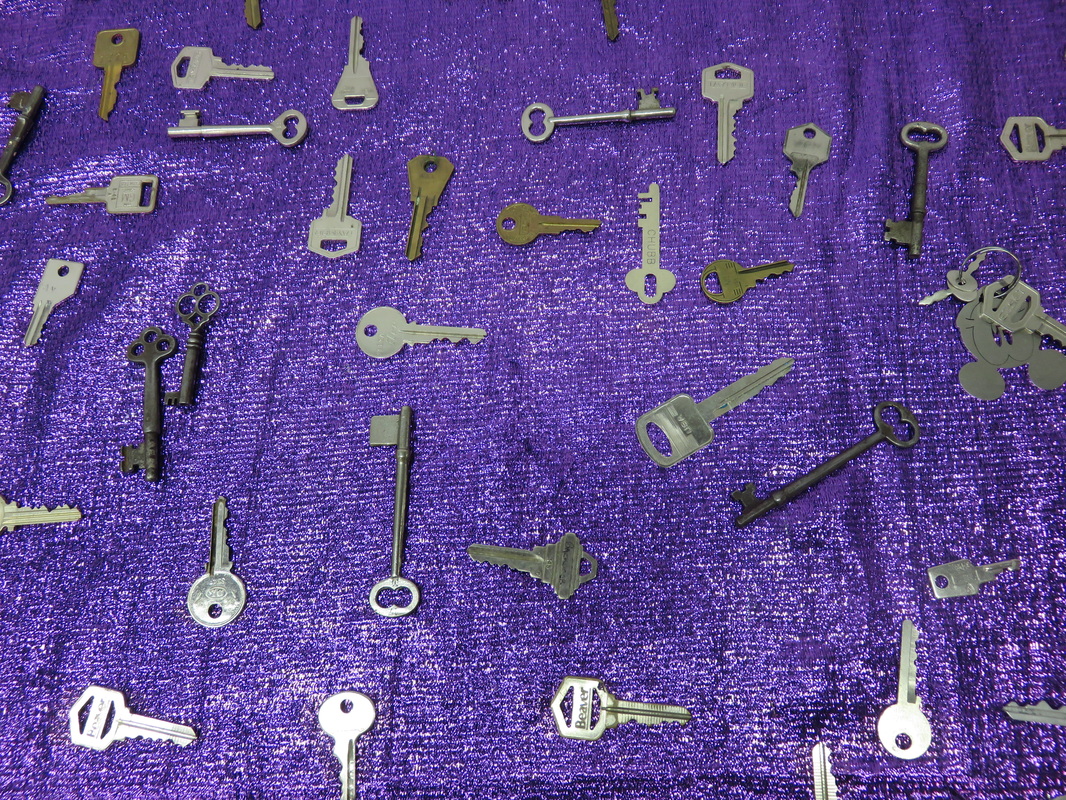 “The choice of keys given to the class”
During the class discussion there were several examples of how a key could be used to symbolize a greater concept. An example of such a case is a group of homeless children who want to keep the key from the art activity so they can pretend that they have a key to a real home, their own place for which that key would  symbolize a place of security were they will belong. Another example of how a key could symbolize a different message.
The main goals of this workshop were to explore how by looking at artworks one explores different emotions and meanings. As well as using symbols in artwork to trigger memories. Another goal of the workshop is to examine how by using a simple object such as a key one can trigger many memories with different associations.  Mainly, this workshop demonstrates that an art therapist can use simple objects as a basis to trigger memories or emotions. Ad as a therapist one can use their experiences to add to the empathy to understand your client.
I selected a few keys which all had something in common. Each of the 5 keys I picked was old and looked like an antique. I was personally attracted to the old keys because I have also fantasied about living in a time before the technological revolution, a time without electronics. I feel there is something more romantic and natural about such a time. I personally hate living in a world where people are dependent on electronic devices. The door to my house can only be opened by an electronic lock, but I have always imagined it would be better to open with a traditional key.
For me a key can symbolize freedom, for it unlocks things and allows you to go explore new places. However, for my artwork I decided to go with the idea that a key represents a treasure. Now a treasure is not merely gold and diamonds, but to me the biggest treasure in this world is life.  Life can also symbolize freedom, for I personally feel free only when I am amongst nature. Art can reflect the patient’s attitude towards life, and allows them the opportunity to experience life from a different point of view. (Lusebrink, 1998)
As a result the artwork I created shows many representations of keys using natural elements found in nature. It ended up being a mix of collage and drawing using leaves and flower petals I brought to share with the class, after having many left over from my stage previously that very day. I used many bright lively colors and emphasise life as well as a variety of materials. On the collage is written the phrase “Where there is a key there is treasure” followed by “treasure = life”. We live in a society that values all the wrong things, for example we judge people on their looks more than their personalities, and we prefer material goods, power and wealth more than anything. However people should realize that the key to happiness is found in the simplicities of life provided by nature. That is also what my artwork represents.
During the workshop I noticed that most people picked a key that triggered a particular memory.  One girl picked a key because it reminded her of a set of keys she once dropped in paint while working with her boyfriend in the garage. Another girl picked a key that reminded her of her father’s car keys.  They key was an object that triggered a memory, often emotional. In my case it triggered a memory I wish I had from a time I wish to have in in. My keys triggered a sort of epiphany that allowed me to further appreciate the simple things in life while also unlocking one of my greatest desires which is to live in a more natural world, a world free of pollution, materialism and electronics. A world that people would be more humane to each other rather than the current reality we live in were most people are so connected to technology that they have forsaken their humanity. 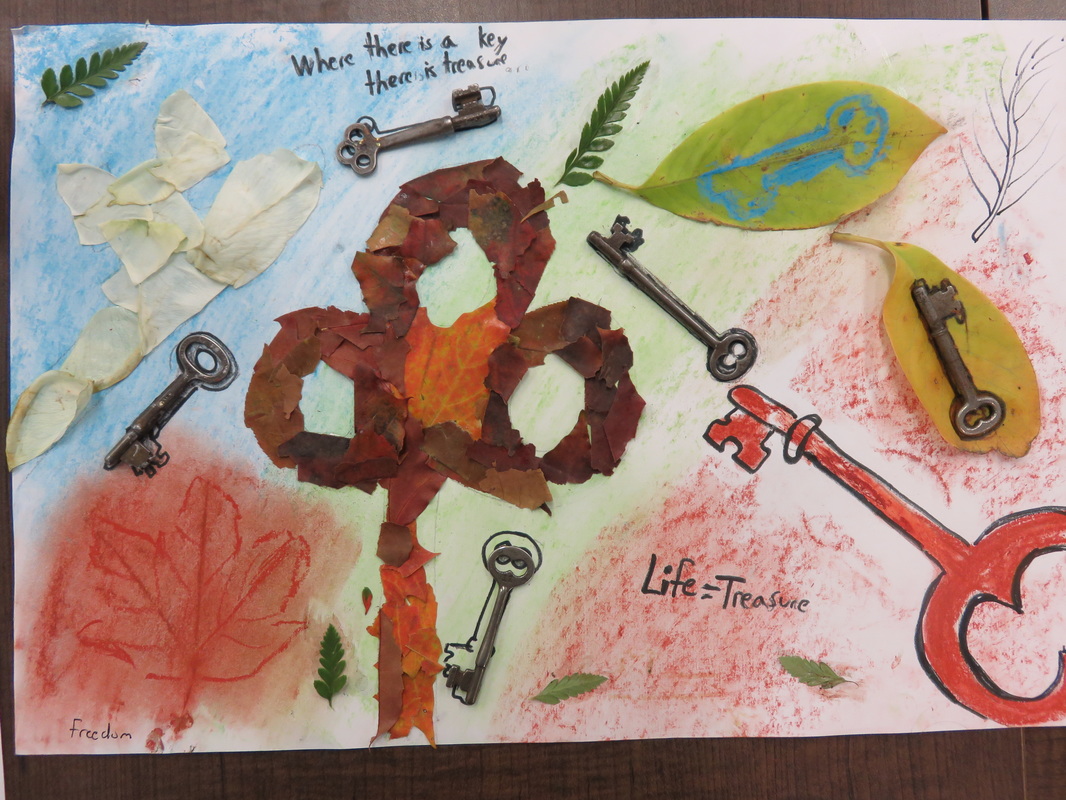 “My drawings inspired by an old key”
Jacobson (1994) describes how art therapy can be used to treat patients with multiple personality disorders by serving as a sort of visual record to monitor the patient’s personality. According to her studies, multiple personality disorders are linked to abuses experienced as a child. By producing art that is triggered by the effected memories the therapist can gain a better understand of the patient. The patient uses art because it is a form of communication that is easy and allows the patient to feel safe. Jacobson states that one of the roles of the therapist is “to provide the dissociated patient with appropriate channels for the expression of feelings and integration of deeply repressed materials” (Jacobson, 1994, p. 48).  Jacobson states that visual imagery such as images that represent past trauma can serve as a catalyst to trigger memories prior to the art making of patients.
Ehresman (2014) states that art therapy provides many benefits to patients suffering from Alzheimer’s disease which currently affects 35.6 million people in the world.  According to her art provides these patients with a means for self-expression. She states that creative processes can reinforce synaptic connections by changing neuronal structure and functioning which can benefit those suffering from memory loss. When dealing with Alzheimer’s disease art therapy meanly provides an opportunity for sensory stimulation, social interaction and creativity. She states that  “creating artwork allows opportunity for expressing thoughts and emotions that otherwise may be difficult to communicate” (Ehresman, 2014).  In this case the art therapist uses art to improve the memory of the patient rather than use an object to trigger to memory.
To conclude, from this workshop I have learnt that objects can be used in art therapy activities as a means to trigger a particular emotion or memory, to gain a greater understanding about the patients while also fostering a better sense of empathy for the therapist.

Lusebrink, V (2001).  Art therapy and the brain: an attempt to understand the underlying processes of art expression in therapy.  Journal of the American art therapy association, 21 é…..(3), 125-135.