This section will focus on the first workshop which occurred on September 24th, 2014.  The main goal of this workshop was to explore the different ways to express emotions.  How a person would express these emotions through the use of various colors, gestures and symbols. This workshop focused on the individuals art making and where the art maker is not influenced by their peer’s art making. The participants of this workshop sat in their own seats which combined with everyone else’s seat to form a square-shaped seating area in the classroom.
The art therapist would name a specific emotion which participants would have to express through drawing.  The materials provided where color pastels and markers and white sheets of paper. The professor would list an emotion and the participant would have approximately 3 minutes to depict that emotion on paper. The overall there was a total of seven emotions that were listed which are: happiness, sadness, anger, lust, fear, excitement and serenity.
When comparing everyone’s drawings there were some noticeable similarities in the choice of color and symbols. For example, for the emotion of happiness people chose to use many bright colors which were filled with life and some common features between drawings was the depiction of nature scenes as well as drawing a bright yellow sun. For sadness many almost everyone used the color blue, and a common symbol was the tear of a crying eye.  For anger the colors red and black were most common, and the lines were very hard and expressive. For fear many people used expressive line gestures; however this emotion was more personal for the participants tended to display a symbol of their own personal fear.
Silvia (2005) describes how emotions can be differentiated according to the evaluations that cause them. Each emotion has a different appraisal structure, which itself is composed on different components.  For example, anger is consisted of judging an event as incongruent with a certain goal or motive.  Silvia developed a theory that concerning art appraisal theories which predict that people will experience interest when they make appraisals that generate interest. 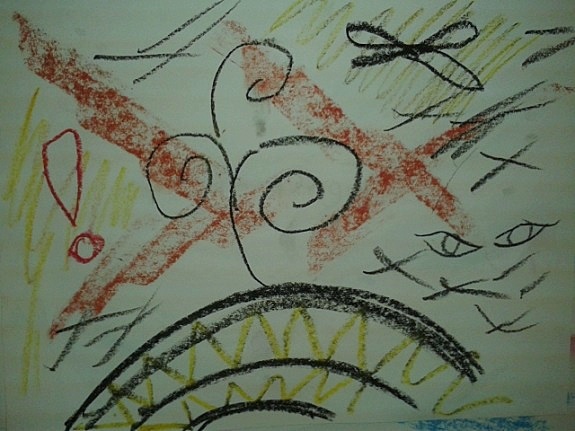 ""My drawing of fear""
Freedver (2007) states that when observing art, specific neurons in the brain is activated which allows the viewer to feel empathy for whatever emotion is displayed in the art work.  In essence the viewer can feel the movement behind every mark in the artwork. This can be seen with this workshop depiction of anger. Most participants used strong lines to express anger, and this allows the viewer to feel that emotion.
Lusebrink (2004), states that the specific part of the brain is involved in emotions, and that is the amygdala.  More specifically, the left amygdala is responsible for conscious information while the right amygdala is in charge of the unconscious information.  According to his study hearing the name of a specific emotion such as sad, mad, glad or scared can modify the visual expression that causes imagery for these emotions. Thus, this has an impact on the placement of lines, choice of colors and the forms that are chosen..  He states that “emotions are important in memory formation and recall. Emotions re important in forming memories, and emotional memories are easier to recall than none motional ones” (Lusebrink, 130). Therefore emotions can also be greatly influenced by memories. For the workshop many of the participants drew something that they were personally afraid of, when they were asked to depict the emotion of fear. In my case, I drew a bee, for I have a great fear of bees and wasps since I was stung by one as a child. The colors I used to express fear were black and yellow, which is also the color of bees. 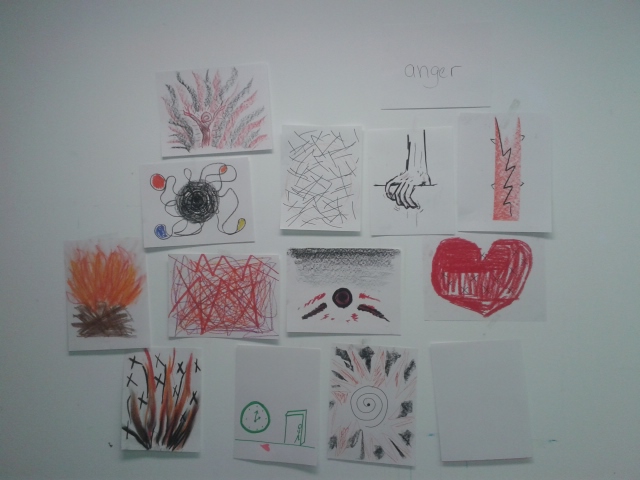 ""The different interpretations of Anger""
When people experience extreme events like those associated with post-traumatic stress, for example combat, an accident, or rape, they are often left psychologically scarred. According to Collie (2006), war veterans in Afghanistan and Iraq who experience post-traumatic stress have experienced an event that has left them with a permanent physiological imprint on the brain.  This causes them to relive their fears, and sometimes experience great difficulty expressing their fears.  Art therapist use the following approaches when working with clients with PTSD: progressive exposure (facing your fears), externalization (verbal therapy), reactivation of positive emotions and improved self-esteem. When making art, the patient should be in a relaxed environment free of stress and the act of drawing would allow them to explore their memories, so they can put on paper what they cannot express in words (Collie, 161).
Another observation from the workshop is that when examining emotions it can be predicted visually. As previously mentioned, many of the drawings shared similar characteristics. For example the colors red and black were used in almost all the drawings to express anger. Another observation is that some of the drawings which depict one emotion could also be used to depict another emotion. The drawings for serenity used a lot of green and yellow which was also seen in happiness. My drawing of fear also contained elements that could represent anger, such as the expressive dark lines, and the angry eyes and exclamation mark.
To summarize, from this workshop I have learnt that people tend to express their emotions in drawings in a similar manner, however each person experiences their emotions based on their own individual personality and memory.

Silvia, P. (2005). Emotional Responses to Art: From collation and arousal to cognition and emotion. Review of General Psychology, 9, 342-357.