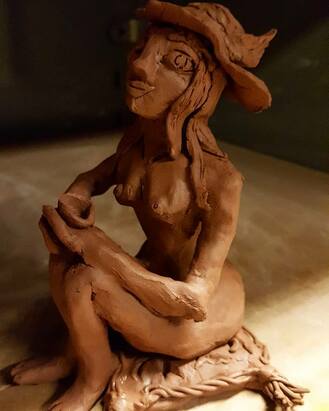 Some of my Ceramic Works

Bisque:  The first step of the process of firing. The step that prepares for the glaze firing.

Clay:  A stiff, sticky fine-grained earth, typically yellow, red, or bluish-gray in color and often forming an impermeable layer in the soil. It can be molded when wet, and is dried and baked to make bricks, pottery, and ceramics.
Types of clay include: Porcelain, earthenware, terracotta

Cones: Small, elongated, 3-sided pyramids of materials designed to melt at a certain temperate. The purpose of the cone is to indicate the process of melting. They are used inside the kiln during a firing to determine to determine the time remaining in the firing. Cones inside a kiln are observed through a peephole during the firing.  The most common firing is the cone 06.

Earthenware: A type of clay used for low-fired ceramics. The less appropriate choice for functional ceramics.

Firing:  The process of exposing ceramic pieces to high hear to transform them to more durable pieces. Once fired, the clay will not dissolve in water.

Functional: A term that refers to any ceramic piece that is not just decorative, but also has an intended use. Examples include: teapots, bowls, mugs, & vases.

Glaze: A mixture of various materials and colorants used to paint the ceramic pieces. When exposed to a high temperature during the glaze firing, it will melt and form a glass-like substance fused onto the ceramic piece.

Kiln: The name given to the oven used to fire ceramic pieces. A structure built for the purpose of retaining heat in the main chamber.

Pinching: A technique used to build pots by entirely molding the clays with the hands. It is called pinching because one pinches the clay with their hands to form the shape of a pot.

Porcelain: A very-high fired class of white ware was introduced by Marco Polo in Europe when he returned from China.  Very difficult to work with but has a translucent quality.

Pottery: Refers to ceramic objects that have a container shape. A term often used to describe ceramics.

Raku: a classification of ceramics that falls into the low-fire range. The term "raku" describes the piece as well as the firing process used to create it. Originally developed in Japan as a technique for quickly producing small functional vessels, in Western Civilization, because the process has been somewhat altered, raku ware is primarily created as decorative pottery. The most interesting aspect of the technique is that a piece is taken directly from the kiln into a raku pit while it is still very hot. The raku pit is lined with combustible materials, which immediately ignite. The pit is covered, and the resulting fire and smoke add a wide variety of finishes to the piece. The process is quick, exciting, and predictable only within a certain range of possibilities. The uniqueness or "one-of-a-kind" aspect of a raku piece is impossible to reproduce.

Slab: A technique for making ceramics where the clay is pressed into thin slabs and then cut, assembled,, and shaped into the desired form.

Wedging: A process used to prepare the clay by kneading dough, to remove air pockets in the clay matter.