While engaging in my own art making after reading about the structuralist model of family art therapy, I was inspired to draw figures and how they relate to each other. These drawings where done in class after reading the articles related to the structuralist model. Both drawings were created using a white sheet of paper, water pastels and markers. The first drawing seen in figure 1 is titled “Coalition”.  At the center of the drawing there are two figures holding each other, one appears to be male and the other female. When I created this drawing I was also thinking of my own romantic relationship, and how I hope to one day form a family. So the figures could represent the spousal subsystem described by Karpel (1983), where two adults unite to form a family. This image also relates to Kerr (2008)’s description of coalition, which is described as an alliance between two members of the family system against another member. This is seen in the image with the figures holding a hand which is a symbol of an alliance. 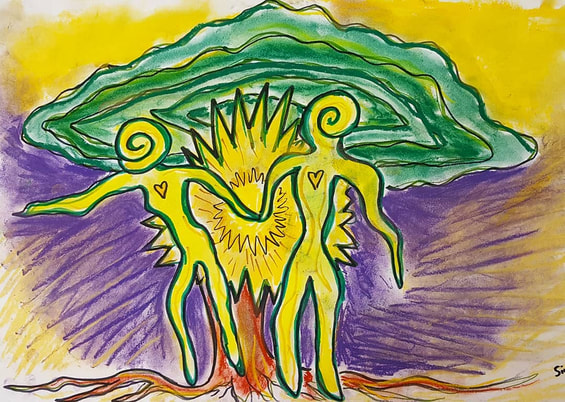 Figure 2: “Hierarchy of the subsystem” is the second image I created which addresses another key concept about the structuralist model of family art therapy, which is hierarchy.  Colapinto (1991) states that the rules the family prescribes include differential degrees of decision-making power for various individuals and subsystems. There is therefore a hierarchy of the family system, for instance the parental subsystem is above the sibling subsystem, and exercises both leadership and protection. In the sibling subsystem, hierarchy exists based on birth order. In art therapy this can be seen in family drawings, by the size and placement of the family members on the drawing. For example the member placed highest on the page or draw the largest is likely to have more power. This is also seen with the use of colors, for instance family members depicted with dark or vibrant colors are more powerful whilst weaker members are drawn with lighter and more transparent colors (Kerr, 2008). In my second drawing there are three figures, one is at the bottom and appears to be holding the other two. The figure on the button is green and the other two are blue. And the figures are surrounded by a circle representing the family system.  Hierarchy is shown with the button figure that is larger than the other two and supporting the others with its hands. 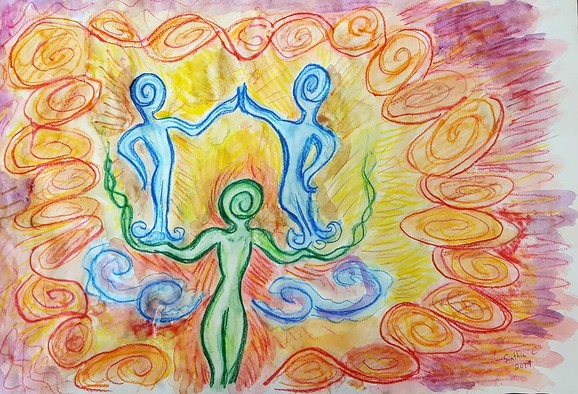 There exist many art therapy interventions within the structuralist model of family therapy.  The art therapist role in this situation would be to effect changes in the family system and to understand the dynamics of the hierarchy in the system.
One art therapy intervention that could be applied to this model is that of the boat-storm-lighthouse drawing seen in figure 3. This intervention requires the family to create a collaborative drawing. The therapist explains to the family that they need to image that they are all in a storm featuring a boat and a lighthouse, and that collaboratively they are to depict this scene in a drawing. The activity is to be done silently, and then the therapist would instruct the members that each person will write a story about what they think happened before, during and after the storm. The family members will then share their stories with this other while the therapist would guide the discussion involving there fears. The therapist would guide the discussion by asking questions like “who would have been most helpful or least helpful in this situations?” This intervention allows the therapist to learn information about the family and to identify the family roles and hierarchy of important decisions and leadership when facing a difficult situation (Lowenstein, 2010). 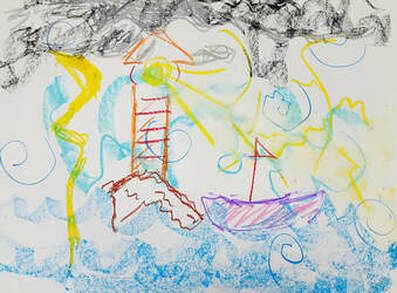 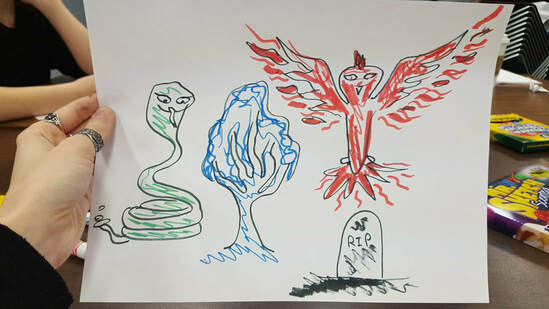 Any therapeutic intervention, including art therapy interventions in this model should involve joining, which is gaining the family’s trust and support, which allows the art therapist to achieve a positive and strong therapeutic alliance with each member of the family (Kerr, 2008, p. 128). The therapist should also accommodate and adapt to the family system. This means the therapist has to temporally refrain from making changes to the system, and focus more on encouraging the communication to take place in his or her presence. Lastly, family mapping is also a useful tool to help organize schemas about the complex interaction patterns between family members. This can reveal information about coalition, affiliations, the nature of the family conflict, the roles of each member, and the allocation of boundaries in the subsystems (Kerr, 2008, p. 129).
Reflecting on the structuralist model of family therapy, I do agree with the notion that each family is a system and that system contains subsystems of its own. I find all the concepts interesting, especially the concept of coalition otherwise known as triangulation. I find this concept interesting because I saw it happen to my own family when my brother would create an alliance with my mother against me. I find it interesting how the founder of this model, Salvador Minuchin addresses the problems within a family by inspiring himself with problems in his own family.  I find this model does possess one crucial weakness. The structuralist model focuses too much on issues of power and hierarchy between two generations, and should focus more on issues of power that happen on relationships in the same generation.  It also focuses more on a nuclear family than interactions with members of an extended family. More emphasis on relationships with extended families would benefit this model.  This model also seems to emphasize the western view of the nuclear family model, and needs to consider more cross-cultural situations.
To conclude the structuralist model of family therapy is still among the most popular and commonly used models in family therapy.  “The family structure is the invisible set of functional demands that organize the ways in which family members interact” (Minuchin, 1974). A dysfunction in the family system can be caused by power, hierarchy, subsystems and boundaries. There are many types of subsystems that exist such as parenting, spousal and sibling subsystems. The structure of a family can only be seen by observing how family members interact. This is why the art therapist who does an intervention based on this model aims to alter the family structure and to create an effective hierarchy. Emphasis is on modifying the family structure in the immediate context of the therapy setting. Therefore the therapist attempts to help the family create better boundaries. The therapist maintains a leadership position and maps the family’s underlying structure and intervenes to transform the structure with the direct aim to change how the family members interact with each other (Kerr, 2008).