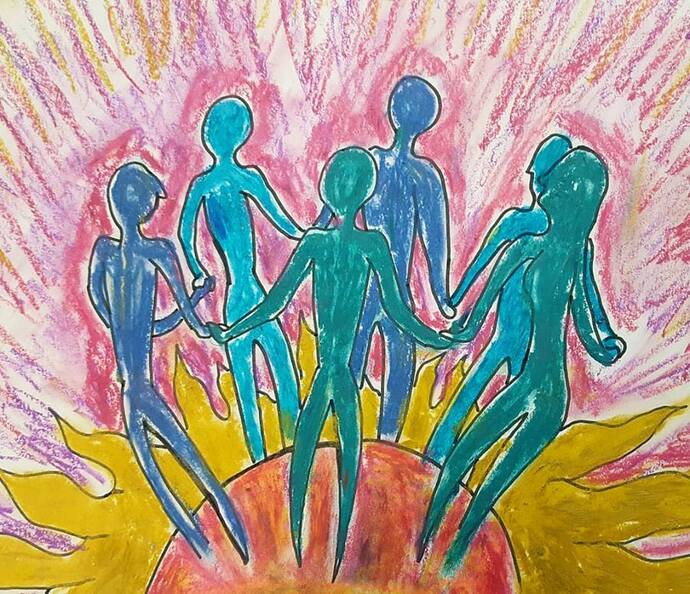 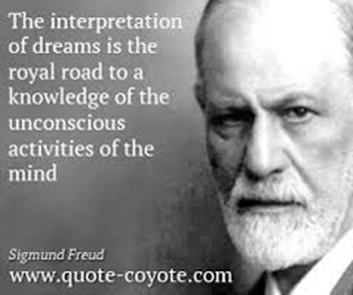 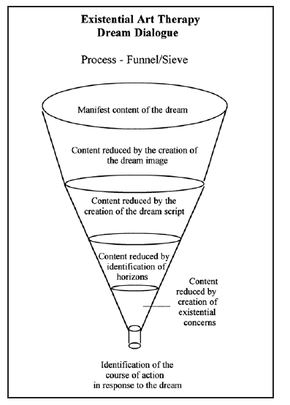 According to Moon (2007) there are three premises that guide the existential art therapist’s interactions with the dreamer and their artwork, these are: the dream is what it is as there are no hidden meaning, the art therapist focuses on the manifest content of the images of the dream and client’s artwork and the art therapist refrains from making interpretive comments. Moon states that “through the process of interacting with and analyzing dream images, the existential art therapist attends to the dreamer by doing with, being open to, and honoring the dreamer’s struggles”. In existential art therapy, it is important that all interpretations of the artwork be left to the client. The role of the art therapist is to refrain entirely from interpretation of the client’s artwork or dream content, but rather guide the client to their own interpretations.
Of course this can be a struggle for an art therapist, for they may feel a desire to share their own interpretations with the clients.  However it does benefit the clients to learn to form their own free associations and discover the problems on their own. When it concerns dreams, the major limitation is that only the dreamer can see their own dream, the therapist does not get to live the dream except online in the client’s descriptive narrative of the dream. This type of art intervention would be ideal for any client who suffers from trauma, for dreams then to happen more to those who suffered traumatic life events. It could also be applied to a population suffering for anxiety and phobias.
For my own personal reflection about this type of art intervention I decided to do the activity myself playing both the role of the art therapist and the client. I decided to focus on a recurring nightmare I often have. I decided to be an artwork based on watercolor, because it’s symbolic as watercolor is a very vivid and lose medium and dissolves easily like dreams do once you wake up. I took over thirty minutes to complete the artwork, as I try to consider that in an actual therapeutic session the client would have approximately that amount of time to create an artwork. The struggle for me was to think of a good idea for a dream, one that could potentially lead to an existential concern.  I decided to pick one of my most recurrent nightmares which I had experienced over the years. In this nightmare I wake up and gradually lose all my teeth. So in the artwork I painted myself waking up and gradually having all my teeth fall off one by one. 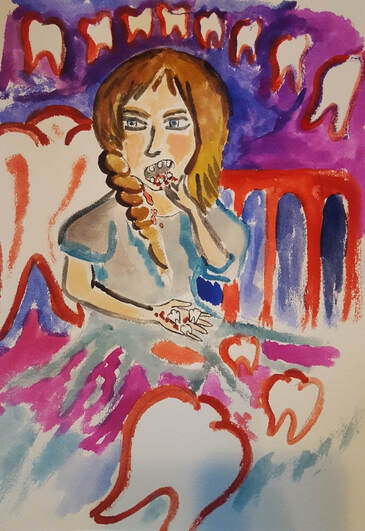 Figure 2: “My Artwork: losing all my teeth”

Once the artwork was completed I typed up a script about the dream. The following is my dream script:  “In one of my most recurring dreams, I wake up or had recently woken up. I take my hand and touch my teeth lightly because I feel something strange. As I touch my teeth I can feel one of them is slightly loose, and then I touch my other teeth and feel more teeth are getting loose. Then the first tooth I touch gets very loose. Eventually more and more of my teeth get lose and I panic with the feeling I cannot control. Then my first took falls off entirely, and then the more I touch my teeth the more they all sta­rt to fall out. In the dream I panic and feel a lot of stress due to the sense that I cannot control my teeth falling out or the urge to keep touching them.”
The challenge for me was not the artwork itself but following all the steps to discover my own dream horizons and existential problems. I distilled all my free associations until I discovered that most of my free associations were related to anxiety and a fear of losing something.  I discovered that my own existential statement of concern was that I feared losing control of myself through failure and anxiety.
I found that applying this art therapy intervention to myself was very useful towards understanding its complexity and the many different steps I had to implement. The major challenge for me was not to make my own interpretations when I played role of art therapist. I discovered how free association is very important in the psychoanalytic procedure. On a personal level it helped me gain a better understanding of myself as well as a better understanding of this art therapy technique. I would definitely love to continue learning more on this subject to perhaps focus more on fears and phobias and implement this intervention more with victims of trauma. This type of population is more likely to dream more symbolic dreams and remember them, which makes them ideal for this type of intervention.
The topic of dream interpretation in understanding trauma and fears is a fascinating topic I would certainly love to explore deeper one day.